Fulfils “How – Death by drowning“ 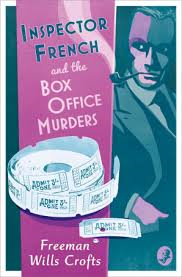 “To lose one material witness may be regarded as a misfortune; to lose two looks like carelessness.”

This is not French’s finest hour – he takes a young girl’s story seriously, but not seriously enough, and she is the one who pays for this mistake with her life. With no real evidence to go on, following a hint from his wife, French does however get back on the track of a criminal gang, and with his usual diligence manages to solve the case.

The main mystery here is understanding what criminal purpose lies behind the gang’s activities, and I thought I had it a few pages before French started down the same line of investigation, only for it to be quickly closed down. Ultimately the scheme is quite clever in its simplicity, but overall, this is probably the weakest of the six French novels reissued by Collins over the last two years.

Fulfils “What – Means of murder in the title“ 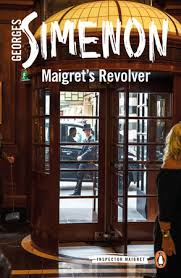 A young man visits Maigret’s home, and on finding him out, steals his revolver. A guest who had wanted to meet Maigret fails to attend a dinner party. These two events lead Maigret to London, where he feels like a fish out of water and gets increasingly frustrated due to the licensing laws and the Savoy Hotel’s rules over what can be served to guests in the hall.

This is #40 in Penguin’s series of new translations and if you are already a fan, then you should enjoy this.

If you haven’t read any, start with the “Maigret Collection 1” (currently available on Amazon) which contains the first six books in the series. They are not fairly clued mysteries, and are possibly an acquired taste, but once you get to know him, it is a pleasure to spend time with Maigret.

Death at the President’s Lodgings

Fulfils “Who – An academic“

Ipso Books have reissued the first six John Appleby mysteries in paperback (nine as e-books) and will hopefully go on to reissue the complete set. In the first of the series, Josiah Umpleby, President of St Anthony’s College, is found murdered in his study, swathed in an academic gown, surrounded by piles of bones. Which of his academic brethren is responsible?

Featuring classic elements such as a detailed plan of the college, a disguise, and a detective novelist among the suspects, alongside references to The Purloined Letter, Trent’s Last Case, and Murder as One of the Fine Arts, this features in Martin Edwards’ The Story of Classic Crime in 100 Books, and is,  in my opinion, an essential read for any fan of Golden Age mysteries.