Mr Carter, Tommy’s boss, offers the Beresfords the opportunity to run a detective agency for six months. Aside from looking out for blue letters with a Russian stamp on them, they are free to run the business as they wish.

They determine that to do this they should study the methods of fictional detectives and apply them to the cases which come to them. Thus each story is a parody of one of Christie’s contemporaries ranging from the still well-known (Arthur Conan Doyle and G. K. Chesterton) to the now thoroughly obscure (Valentine Williams and Isabel Ostrander).

This was the first collection of Christie’s short stories that I ever read, so I have a fondness for it, and it is definitely a lot of fun. I am unfamiliar with most of the sleuths parodied so can only comment properly on the “Man in the Mist” which definitely has a Chestertonian feel, particulary with the red-haired pacifist poet of whom it is said “there’s a gentleman seems to be in a hurry” to which Tommy replies “he’s the sort of gentleman would be in a hurry.”

The cases presented are:

A Fairy in the Flat (FF) – in which the Young Adventurers become International Detectives.

A Pot of Tea (PT) – in which Tuppence plays matchmaker.

The Affair of the Pink Pearl (PP) – in which a stuck door presents an opening to Tommy.

The Adventure of the Sinister Stranger (SS) – in which an expensive wedding present proves its worth.

Finessing the King/The Gentleman Dressed in Newspaper (FK/GDN) – in which a hole reveals the whole.

The Case of the Missing Lady (ML) – in which there is only slim chance of success.

Blindman’s Buff (BB) – in which light gives a blindman an advantage.

The Crackler (TC) – in which Tommy coins a new word.

The Sunningdale Mystery (SM) – in which masculine and feminine combine perfectly.

The House of Lurking Death (HLD) – in which “it is a great advantage to be intelligent and not to look it”.

The Unbreakable Alibi (UA) – in which two heads are better than one.

The Clergyman’s Daughter/The Red House (CD/RH) – in which it is shown that if you seek, you do indeed find.

The Ambassador’s Boots (AB) – or Pack Up Your Troubles in Your Old Kit Bag.

The Man Who Was No. 16 (M16) – in which the International Detectives become something else.

Have been married for six years.

He works “more or less in the Secret Service, but it’s pure office work”.

He is getting fat and comfortable, while she does slimming exercises.

She has about forty hats and has read every detective novel published in the last ten years.

She is not a day over twenty-five, which if they have been married for six years, contradicts “The Secret Adversary” which was set in 1920, where given her war service, Tuppence must have been at least twenty.

When imagining an image of a fairy on a photograph Tuppence wonders if they should write to Conan Doyle (FF). Most known for creating Sherlock Holmes, Doyle was very interested in spiritualism and psychic phenomena. He championed as genuine the Cottingley Fairies which appeared in photographs taken by Elsie Wright and Frances Griffiths in 1917. In 1983 they revealed that the pictures were faked.

Tuppence looks up Lawrence St Vincent in Debrett (PT). Debrett’s Peerage and Baronetage was first published in 1802 as Peerage of England, Scotland, and Ireland. Its 150th editon will be published in 2019.

Tommy has bought a very good camera so that he can play the role of Thorndyke and therefore Tuppence is Polton (PP). Doctor John Evelyn Thorndyke was created by R. Austin Freeman in 1907 and was described as a medical-jurispractitioner, effectively the first fictional forensic scientist. Nathaniel Polton was his lab technician.

Tuppence still plans to use the simple Brownie to take her photographs (PP). The first Brownie camera was manufactured by Eastman Kodak in 1900. The final model was made in 1986.

Tommy says that he should have a Smoker’s Companion (PP). Given Tuppence references a corkscrew, this is probably a device for tamping and cleaning a pipe, which implies that Thorndyke, like Holmes, was a pipe smoker – can anyone confirm that?

The precedent set by Rex v Bailey is mentioned by Tommy (PP). I believe this to be a fictional case, however R v Bailey from 1983 is an interesting case.

Doctor Bower’s visit reminds Tuppence of Clubfoot and so in this case the Beresfords decide to be Desmond and Francis Okewood (SS). The Okewood brothers were created in 1918 by (George) Valentine Williams. “The Man with the Clubfoot” was another of his novels published earlier in the same year.

When Tommy is told that he must wear a fireman’s costume to the ball he realises that he is to be Riordan to Tuppence’s McCarty (FK). These characters were created by Isabel Ostrander (1883 – 1924) who wrote under her own name and used a number of pseudonyms including Robert Orr Chipperfield, David Fox, and Douglas Grant.

Tommy wears an eyeshade in order to play Thornley Colton, the blind Problemist (BB). Thornley Colton was created by Clinton H. Stagg c.1913 and operated in New York City. Having recently read a Max Carrados short story in one of the British Library Crime Classics anthologies, I had assumed that he had inspired this one of Christie’s parodies.

Tommy plans to write a big cheque to St Dunstan’s (BB). Now called Blind Veterans UK, this is a charity founded in 1915 to support blind and visually impaired ex-service personnel.

Tommy refers to Father Brown, as he is still disguised as a Roman Catholic priest following an unsuccessful case (MM). Father Brown is the best-known of G. K. Chesterton’s short story sleuths, first appearing in 1910 and going on to feature in another fifty tales.

The constable says that if he touches anything at the crime scene then the inspector will give him beans (MM). I hadn’t come across this phrase before, which means to give someone a telling-off.

Edgar Wallace is referred to in “The Crackler”. For more information see my recent review of The Four Just Men.

Hank P. Ryder drinks a variety of cocktails (TC). An Angel’s Kiss is equal measures of the following layered: crème de cacao, sloe gin, brandy, and light cream. A Horse’s Neck is brandy and ginger ale with a long twist of lemon over the side of the glass. A Martini is gin and vermouth with an olive or twist of lemon. I can’t find what a Road to Ruin is made from.

Tuppence deduces that Tommy is The Old Man in the Corner and that therefore she is Polly Burton (SM). This unnamed character, created by Baroness Orczy (probably most remembered for her Scarlet Pimpernel novels), solves crimes in discussion with a female journalist in an A.B.C. teashop.

Tuppence then mentions “a lady Molly touch” (SM). “Lady Molly of Scotland Yard” was a book of short stories from 1910, also written by Baroness Orczy.

Tommy thinks their client is “like those girls Mason writes about – you know frightfully sympathetic, and beautiful, and distinctly intelligent, without being saucy” and so decides to be the great Hanaud (HLD). A. E. W. Mason (1865 – 1948) is best-remembered for his 1902 novel “The Four Feathers”, but he also created Inspector Gabriel Hanaud, who first appeared in the 1910 novel “At the Villa Rose”. He was deliberately as different from Sherlock Holmes as he could be: a stout, French, professional policeman, relying on psychological insights rather than physical evidence.

Miss Logan says that “Lady Radclyffe used to swear by my tansy tea – a wonderful thing for a cold in the head” (HLD). Tansy has been used as a flavouring for puddings, as well as a to treat parasitic worms, migraine, neuralgia, and rheumatism. It should be avoided by pregnant women.

Tuppence decides they should be Inspector French when dealing with “An Unbreakable Alibi”. French was the main series detective of Freeman Wills Croft (1879 – 1957) For examples of his work see The Sea Mystery, The Box Office Murders or Mystery in the Channel.

In wanting to help a clergyman’s daughter, Tuppence is mimicking Roger Sheringham (CD). Sheringam was created in 1925 by Anthony Berkeley Cox (1893 – 1971) and appeared in a number of novels, including the wonderful The Poisoned Chocolates Case.

Tommy invents an aunt who at the outbreak of the war drove to the Army and Navy Stores and bought sixteen hams (CD). The Army & Navy Co-operative Society Ltd was founded in 1871 to supply goods to its service personnel members at the lowest possible price. It became a limited company in 1934 and was taken over by another department store chain, House of Fraser, in 1973.

Tuppence is eating muffins and so is taking on the character of Dr Fortune, with Tommy as Superintendent Bell (AB). Reggie Fortune was created by H. C. Bailey (1878 – 1961) and appeared primarily in short stories, beginning with the 1920 collection “Call Mr Fortune”.

Albert, who is some sort of domestic servant and becomes the office boy, was the lift boy in “The Secret Adversary”. Mr Carter also returns from that book.

The murderous Number 4 and the end of the novel “The Big Four” are mentioned when Tommy decides that for their final case he shall take up the methods of Hercule Poirot.

Tommy and Tuppence are “Who – A crime-solving duo”. 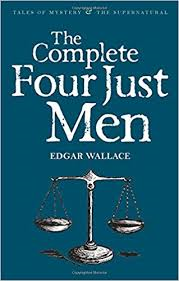 Who are The Four Just Men? This is the question asked by both the police and the press.

They have murdered sixteen people who they believe have committed serious injustices which the law cannot touch. Now they threaten the life of the British Foreign Secretary if he continues to pass a piece of legislation.

The Just Men believe that the new law “will place in the hands of the most evil government of modern times men who are patriots and who are destined to be the saviours of their countries”. Sir Philip Ramon believes that it “will remove from this country colonies of dangerously intelligent criminals, who, whilst enjoying immunity from arrest, urge ignorant men forward to commit acts of violence and treason”. The reader is not given enough information to judge who is right, but then with any current news story how often are the public provided with sufficient unbiased evidence with which to form a proper conclusion?

A media storm ensues and as each communication from the vigilantes causes a ring of protection to be drawn closer around the target the question becomes how can the quartet possibly carry out the sentence of death which they have pronounced? And if they do, can they escape with their own lives?

Edgar Wallace’s first novel (in my opinion his strongest, but then I feel he was much better suited to short story collections such as “The Mind of Mr. J. G. Reeder” and “The Brigand”) and it made his name due to a large self-funded advertising campaign and the promise of prizes for those who could solve the mystery before the final chapter was published. Wallace omitted to put a limit on the number of potential prize winners and even though the book became a best-seller, he could not cover his costs and declared himself bankrupt.

One other interesting fact, revealed very early on, is that one of the original Four Just Men has already been killed. An alternative opening line would have to be: “Merel was dead to begin with.”

Whilst the other three novels are not as good, this Complete edition from Wordsworth is well-worth picking up just for the first novel and the two collections of short stories.

Passenger to Frankfurt by Agatha Christie

The Case of the Howling Dog by Erle Stanley Gardner

The Sunshine Corpse by Max Murray

The Progress of a Crime by Julian Symons

And So To Murder by Carter Dickson

The Ivory Dagger by Patricia Wentworth