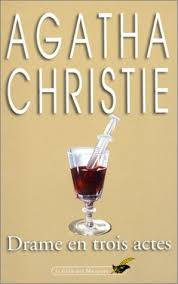 When the vicar dies at Sir Charles Cartwright’s cocktail party, the local doctor believes it to be from natural causes.

However when another attendee later dies from nicotine poisoning, the retired actor takes up the part of Sherlock Holmes with Mr Satterthwaite as his Doctor Watson. Hermione Lytton Gore acts as third sleuth but despite the efforts of the three, it is only Hercule Poirot who can shed illumination on a carefully stage-managed crime.

Regular readers may have wondered how I have selected the book covers to illustrate my posts. They are, as far as I can recall, the covers of the first copy of each book that I ever read. Wishing to avoid reading too much genuine French literature for my A-level “fiches de lecture” I picked up two Agatha Christie’s on a school trip to Cambrai, one of which was “Drame en trois actes”.

Reading a detective story in a language with which I was not fully familiar is probably partly responsible for my negative attitude to this story – by the end I knew who the murderer but only had a sketchy idea of how and why and having not understood everything properly did not have that moment when the scales fall from ones eyes and all becomes clear.

However, after a second re-read in English, I am still of the opinion that it is a bad book – I will go into more detail in the spoilers section below – but it just doesn’t make sense. I don’t believe the killer would have acted as they did, either to carry out this particular plan, or when there were other avenues open to them to achieve their ends. They are made to fit the plot rather than the plot fitting the character.

One of the central elements is dealt with much more logically and effectively in another of Christie’s works; here it is interesting but not convincing.

Poirot is a peripheral figure; either Mr Satterthwaite should have solved the case alone – which would have been pleasing for Watson to have out-detectived Holmes – or with the aid of Harley Quin. This case with its lovers and links to the theatre would have been perfect for him to have provided at least a cameo as part of the conclusion.

Has met Mr Satterthwaite before but as far as I am aware this is undocumented.

As a boy was poor, one of many children. Entered the police force and worked hard, making a name for himself. Was about to retire when the War came. Although now rich, he is not satisfied.

Has to build his card house from “Happy Families” cards following a mix-up in a shop.

His house is on Chelsea Embankment.

The story is set in 1933, seventeen years after Stephen Babbington’s arrival in Loomouth in 1916.

Sir Bartholomew Strange received his knighthood in the recent Birthday Honours list. Birthday honours have been awarded in the UK to mark the sovereign’s birthday almost every year since at least 1860. After 1908 these were given on the sovereign’s official birthday, the first, second or third Saturday in June.

The spelling of Bortsch, rather than Borscht is used, for the type of soup.

Angela Sutcliffe was sometimes spoken of as Ellen Terry’s successor. Dame Alice Ellen Terry (1847-1928) was the leading Shakespearean actress of her day.

One of Sir Charles’ theatre roles was Aristide Duval, the Man with the Limp. There are a number of 1920s films called “The Man with the Limp” including one from 1923 written by Sax Rohmer and featuring his most famous creation, Dr Fu Manchu.

The lines of Tennyson that come to Mr Satterthwaite’s mind are from “Lancelot and Elaine”. She is the “lily maid of Astolat”.

Colonel Johnson says that “fans” is an American term. One derivation of “fan” is from “the fancy” to “fance” to “fan” with it being attributed to Charles Von der Ahe, owner of the St Louis Brown Stockings baseball team, in 1882.

The line of Burns quoted by Mr Satterthwaite are from “On the Late Captain Grose’s Peregrinations Thro’ Scotland”.

One of Mrs Babbington’s sons lives in Ceylon. Sri Lanka was called Ceylon by the British who occupied some coastal areas 1796 before taking full control in 1815. Independence came in 1948 but the name was not changed until 1972.

Mrs Dacres shows Egg a blue Patou. Jean Patou (1880-1936) was a fashioner designer and perfumier and founded of the House of Patou. The fashion business continued until 1987 but the fragrance brand still exists.

He refers to the events of “The Mysterious Affair at Styles”.

Mr Satterthwaite attempts to start telling Sir Charles about the events of “At the ‘Bells and Motley'” from “The Mysterious Mr Quin”.

Mr Satterthwaite’s romance, mentioned to Lady Mary,  is also detailed in “The Face of Helen” from the same collection.

Poirot admits to one failure, long ago in Belgium. This is “The Chocolate Box” from “Poirot’s Early Cases”.

Fulfils “How – death by poison”.

Murder as dress rehearsal! I don’t buy it – at least not the way that it is done. If you did, you wouldn’t call attention to whether there had been foul play or not – you’d just wait and see whether anyone else came up with suspicions. And why would you do it? If it went wrong, what would you then do about the real murder which you wanted to commit? You would need to invent a whole new method.

Sir Charles, I feel, would have been bolder and just carried out the murder of Strange in the way that he does, in the guise of Ellis. That would have been a good enough mystery on its own. A man of his vanity, who has not thought to destroy his chemical equipment would not need a dress rehearsal.

But given that he later sends the poisoned chocolates to Mrs de Rushbridger, why not cut to the chase and simply eliminate the unfortunate Mrs Mugg? He could have used his acting ability to get close to her and poison her in some way. Although Strange is aware of her existence, he is unlikely to notice her death, especially if it is not suspicious.

Poirot, although careful for Miss Wills’ safety, takes no precautions for the life of Mrs de Rushbridger, even though he knows her telegram is a fake, which seems rather careless and he doesn’t even seem to blame himself in any way for this.

The one element I did quite like was the use of the Happy Families cards to enable Egg to tell him Sir Charles real name. How deliberate was the use of Mugg – given that Sir Charles as an actor mugs for a living and that he was planning to make a mug of Egg, Mr Satterthwaite, and Poirot.