Nurse Amy Leatheran, at the urging of Dr Giles Reilly, puts pen to paper to 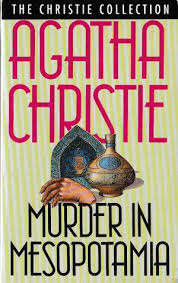 provide a true and fair account of what happened four years ago during the University of Pittstown’s Archaeological Expedition to Iraq.

Her story begins when she is invited by Dr Leidner, head of the expedition, to come and support his wife who is very afraid of something that he is unwilling to disclose.

Mrs Leidner warms to Nurse Leatheran and tells her that fifteen years ago her first husband, Frederick Bosner, died in a train accident. However, he has written her letters from beyond the grave, threatening her for marrying another man and promising to kill her. Dr Leidner is aware of these letters, but both he and Nurse Leatheran suspect that Mrs Leidner has been writing them herself.

The next day Mrs Leidner’s fears are realised when she is found dead in her room, the windows bolted and the door under almost constant observation, which implies that only a member of the expedition could be responsible. Has Frederick Bosner come back from the dead or has someone else used the situation to their advantage?

Fortunately, Hercule Poirot is passing through the area on his way to Baghdad and decides to take on the case, eventually revealing the extraordinary double truth of the matter.

Nurse Leatheran provides a different perspective to Poirot’s usual Watson, Captain Hastings, and the book draws heavily on Christie’s personal experiences at the digs that her second husband, Sir Max Mallowan, worked on.

I liked this book very much on first reading over twenty years ago and whilst I do now acknowledge some of its silliness (coincidentally discussed very recently at ahsweetmysteryblog) I have prepared a possible defence in the spoiler section below. The main point of recommendation is the “locked room” scenario which is infinitely superior to that in Why Didn’t They Ask Evans?

Can quote Arabic but not speak it.

Has five lumps of sugar in his tea.

Describes himself as a practicing Catholic.

The story is set in 1933 and takes place just after Poirot has given assistance to the French army in Syria as mentioned at the start of Murder on the Orient Express but before he boards the Taurus Express for Istanbul. The retconning doesn’t quite work as “Murder on the Orient Express” begins on a “winter’s morning” and yet this book is set in March.

Nurse Leatheran writes “she has ‘fancies’…one knows what that usually means (but I hope not actually D.T.s!)”. She suspects that her new patient has problems with alcohol but hopefully is not suffering from delirium tremens following complete alcohol withdrawal after a significant period of heavy, regular drinking.

Dr Leidner’s team are excavating a large Assyrian city similar to Nineveh. Excavations were begun at Nineveh in 1842 and continued through the 19th century. They had re-started in 1927 under Campbell Thompson.

Coleman introduces Nurse Leatheran to the team as “Sairey Gamp”. Sarah Gamp is a midwife and nurse in Charles Dickens’ “Martin Chuzzlewit”.

Father Lavigny is from the Order of the Pères Blancs at Carthage. The Missionaries of Africa, commonly known as the White Fathers, were founded in 1868 to evangelise and educate people in Africa.

When Poirot begins his exposition, Nurse Leatheran has a vision of the East and thinks of Samarkand and Ispahan. Samarkand dates from the eighth or seventh century BC and was captured by Alexander the Great in 329 BC and Genghis Khan in 1220. Today it is the second largest city in Uzbekistan. Ispahan (more properly Isfahan) has twice been the capital of Persia and today is the third largest city in Iran.

Fulfils “How – death by blunt instrument”.

It’s the One Where the Only Person Who Couldn’t Have Done It Did It and The Second Husband is the First Husband All Along!

The key here to understanding the identity of the killer – as in another Christie classic – is to carefully note the time taken to carry out certain actions. Here, Dr Leidner comes out of his wife’s room calling for help about a minute and a half after entering it –  if you read in detail, which I don’t, that should raise suspicion. You can get an awful lot done in ninety seconds – no sniggering at the back there!

When I first read this I was blown away by both the method and Dr Leidner’s real identity and didn’t have any qualms as to how likely it would have been to have fooled his wife for over two years. Whilst Poirot’s solution is correct, some of his reasoning and inferences may not be, so let’s see if a more plausible explanation for why Louise Leidner did not realise that Eric Leidner was Frederick Bosner.

Poirot acknowledges that “the intimacy of marriage might awaken a memory” and that is why a Bosner letter is sent after the marriage, in order to demonstrate that Leidner and Bosner are separate people.

However, what if the second marriage was never consummated? We know that the character of Louise Leidner was based on Katharine Woolley whose marriage to Leonard Woolley was unconsummated.

If Louise Leidner strongly disliked sex, as a young woman she may have just given in to her husband’s advances, but this may have been a factor in her betraying him to the authorities. This would explain why, along with the Bosner letters, she did not remarry until she met Leidner. Perhaps he seems different to other men: he is a middle-aged, respected academic; she, from her choice of reading material, is an intelligent woman – she believes theirs is a meeting of minds, not bodies.

When she reveals shortly after marriage ceremony that their will be no physical relationship, that is the trigger for the Bosner letters to restart. He has waited fifteen years to obtain his desire and now it has been dashed away. Her fate is sealed from this point.

As for a relationship with Richard Carey, there is no evidence here of a physical affair. What if Carey’s self-disgust stems not from having betrayed his friend, but from having betrayed himself? Perhaps he tried, possibly successfully, to force himself upon Louise. We now know that those who have been abused often take a long time to speak of their experiences.

As Louise is no longer there to contradict them, both men choose to accept Poirot’s versions of their motivations rather than reveal the darker and more damaging truth of what happened before Louise’s murder.