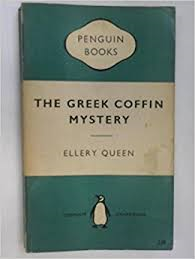 Obligatory introduction to any review of an Ellery Queen book: there are two Ellery Queens:

(1) Ellery Queen is the pseudonym under which the son of a New York policeman writes up the real-life cases in which he and his father are involved. He writes detective fiction under his real name.

The convention I have seen elsewhere is that Ellery refers to the character and Queen to the authors and that is what I will use here.

Although the fourth in the series in order of publication, J. J. McC.’s introduction implies that this case came first chronologically and this is born out as we see the development of Ellery’s method and a particular aspect of his way of working.

The story begins at the funeral of Georg Khalkis, an art dealer of Greek extraction. Shortly after the service in the graveyard neighbouring the family home, a lawyer finds that the recently changed will, which he had seen five minutes before the burial party left the house, has vanished from the safe. The nosy crowd gathered outside the house swear that no one else has gone in or out of the house. A thorough police search of the property and all the people therein is undertaken which reveals nothing.

A few days later, Ellery is informed of the facts and deduces where the missing will must be. When this lead is followed up, the will is still not found, but something much more unpleasant is and thus begins Queen’s most elaborate mystery to date.

I was completely taken in – this is normally the case – but here I had thought I was on the right track for once only to then realise that I had seen exactly what Queen had wanted me to see and draw my flawed conclusion accordingly. And yet because of one particular aspect of this case, if I had checked something that briefly crossed my mind, I might have got to the solution.

In many ways the whole thing is nonsense – I don’t believe a real murderer would act as they do in this book – but if it is nonsense, it is glorious nonsense: a fabulously crafted example of the pure puzzle taken to extremes. Having learned in reading The Dutch Shoe Mystery to accept Queen on their own terms, I found this to be a brilliant read.

Fulfils “What – Written by more than one person”.

A Caribbean Mystery by Agatha Christie

The Abominable Man by Maj Sjowall and Per Wahloo

The Scent of the Night by Andrea Camilleri

The Remorseful Day by Colin Dexter