Francis Pettigrew, barrister, has left his London chambers to do his bit for 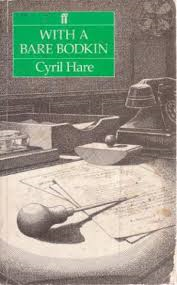 the war effort by taking up the position of legal adviser to the Pin Control, an obscure but important government department. His days are spent in the marbled halls of a requisitioned stately home surrounded by civil servants and his evenings at the Fernlea Residential Club with other incomers who are there for the duration.

Pettigrew discovers that one of there number, Mr Wood, is actually the detective story writer Amyas Leigh. This revelation results in a group of residents entertaining themselves in the evenings by devising a murder mystery based at the Pin Control. Their fun even extends as far as lurking around the ministry’s corridors to test the practicalities of possible scenarios.

Comedy turns to tragedy when life imitates art and a body is found but the victim is not the one selected by the writing group. Is there any connection with Inspector Mallett’s investigations into the black market or with the disappearance of the mysterious Blenkinsop file? Or is this a more personal murder?

The setting of the book is very well done and is a reminder that to some extent life outside of a bombed city continued with some degree of normality during the Second World War. The question of how temporary civil servants may look to gain a commercial advantage from their wartime service is something that I had not thought of before but is an underlying thread through this story.

However ultimately I found it frustrating because it turns on something that I found unbelievable – strangely enough this is not Hare’s fault as such – which for me parallels a scenario in current American politics. I know that others have reviewed this book quite favourably so please don’t let me put you off because I did enjoy it up until the end.

Fulfils “What – Means of murder in the title”.