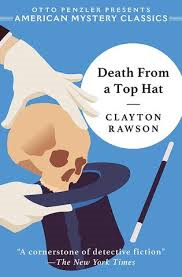 been issued I find that my recently purchased John Dickson Carr’s don’t feature at all but the locked room list is a good excuse to promote Rim of the Pit and Whistle Up the Devil up my TBR pile and to buy The Case of the Gilded Fly, Sealed Room Murder, and Death from a Top Hat, which were all in my mental list of definite future buys. Fortunately for my sense of order, the final title, Hercule Poirot’s Christmas, happens to be the next in my chronological reading of Christie.

Death from a Top Hat starts with the narrator, freelance writer Ross Harte, working on an article on the state of the modern detective novel in which he lists 47 fictional sleuths, 9 general ways of killing, and 5 specific methods of ingenious murder, before beginning to conclude that there is nothing new left to write. He is interrupted by loud voices outside his apartment which culminate with a woman saying “There is death in that room!”

He helps the three visitors break into his neighbour’s apartment where they find the occupant, Cesare Sabbat, strangled to death and lying in a pentagram drawn on the floor. Both external doors were bolted and locked with the locks stuffed with material from the inside and there are no signs of the windows having been tampered with.

As all the people connected with the case are illusionists of one sort or another, Harte suggests that the police bring in his friend, the Great Merlini, as an independent technical expert but will even his expertise be enough to give the customary big reveal at the end?

We already know the answer to this as on page two, Rawson has shown us what is up his sleeve as Merlini’s two key post-resolution observations are presented, but will the reader be able to make use of this information? I couldn’t although I was pleased that I twigged much earlier than Harte during the final explanations what had happened – nowhere near as smart as a Holmes but better than a Watson for once.

This was a very enjoyable read with the bonus to me as a mathematician of a geometry problem. Merlini references and expands upon Dr Fell’s Locked Room Lecture from The Three Coffins. I can understand why this title made it onto the list of Top 15 Impossible Crimes.

This is the first of the recent American Mystery Classics series that I have bought and the presentation is very good. I won’t become a completist like I am with the British Library Crime Classics but will definitely be getting some more of this imprint.

The Case of the Drowsy Mosquito by Erle Stanley Gardner

The Footprints of Satan by Norman Berrow

The Red Redmaynes by Eden Philpotts