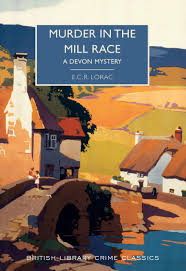 This is the fourth Lorac reprint in the British Library Crime Classics series and with a fifth due later in the year will put her joint second with George Bellairs behind only John Bude with six as the most reissued authors in the range.

Dr Raymond Ferens and his wife (or “my wench”) Anne take up a seemingly idyllic rural Devon practice to get out of the city. Ray however has no illusions and agrees with Sherlock Holmes’ assessment that the countryside is no more innocent than the town when he says “whenever you get a group of people living together, whether in town or village, you find the mixed characteristics of humanity – envy, hatred, malice and all uncharitableness mingled with neighbourliness and unselfishness and honest-to-God goodness…if a social statistician could get busy in both, he’d find the same percentages of human virtues and human vices.”

The fly in this particular ointment is Sister Monica, warden of the local children’s home, who the Ferens suspect is not quite the saint that the locals make her out to be. Thus it is no surprise when she turns up drowned in the titular mill-race. When the villagers close ranks and refuse to talk to the policeman from the next village, the Chief Constable is happy to call in Scotland Yard which comes in the form of Lorac’s regular CID officer, Chief Inspector Robert Macdonald.

He conducts a shrewd investigation and can’t be fooled by the country people’s attempts to pull the wool over his eyes. There is nice interplay between him and his subordinate DI Reeves who he trusts implicitly and to whom he gives free reign.

Reading this is a pleasant way to pass the time but nothing out of the ordinary and I probably would not have bought it were I not collecting the whole of the BLCC output. However if you enjoyed the similarly set Fire in the Thatch then I am sure you will like this.

Fulfils How – Death by drowning”.

The Frumious Bandersnatch by Ed McBain

The Glass Key by Dashiell Hammett

Appleby on Ararat by Michael Innes

The Phantom Passage by Paul Halter

The Case of the Empty Tin by Erle Stanley Gardner