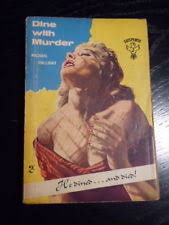 Vintage Mystery Challenge as I had never heard of the author and the risk at 50p was minimal. Looking on Wikipedia I found that Michael Halliday was one of the 20+ pseudonyms of John Creasey, who churned out over 600 novels over forty years.

Jim Abbott is reluctant to attend his company’s Annual Dinner and Dance because he is due to give a speech praising his boss, Sir Henry Moffat who he doesn’t really like. Having got blood from a shaving cut on his dress shirt he is ready to call the whole thing off until he is helped out by Moffat’s secretary, Hetty Lane, and a new neighbour from the flat downstairs.

The evening goes well enough until Abbott is saved from delivering his speech when Sir Henry collapses during his own address. An hour later he is dead from strychnine poisoning and soon Abbott finds himself a primary suspect in a murder case.

This is definitely a thriller rather than a fair-play mystery as Abbott survives multiple attacks and has to determine who he can trust, particularly regarding his new neighbour who has secrets of her own.

Not a particularly good book, but an interesting reference to “an over-stocked larder, with far more food than you’d expect to find in one person’s cupboard in such austere times. A tin of biscuits, labelled by a famous maker, was a pre-war sight.” A reminder that rationing of some items in the UK continued until as late as 1954.

Fulfils “Why – Out of your comfort zone”.