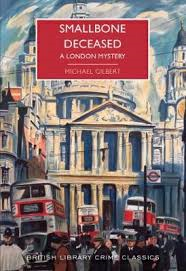 anthologies, particularly “Cousin Once Removed” from “Resorting to Murder”, and knowing the reputation of this book, I was very excited to see it and two others by the same author appear in the BLCC schedule almost a year ago.

The recently deceased Abel Horniman, former lead partner of the law firm Horniman, Birley and Craine, as well as being a great lawyer was also an administrative genius having created a filing system that is second to none and a patent dust-proof, moisture-proof, air-proof and most importantly mouse-proof deed box. Whilst the latter are excellent for protecting clients’ documents someone has also figured out that one would make a good hiding place for a corpse as when the Stokes Will Trust box is opened, the last remaining trustee is found within it having been there for some weeks.

Henry Bohun, as a brand new member of the firm, is immediately discounted as a suspect and is used by Inspector Hazlerigg as his inside man, which combined with the well realised workplace setting, made it reminiscent of Murder Must Advertise by Dorothy L. Sayers.

The writing style is not laugh out loud funny, but kept a wry smile on my lips with descriptions such as:

“The Reverend Eustace, a vast red man who had taken his college eight to the head of the river in ’08, sinking outright two of the four boats which stood in his way, and had been treating the powers of darkness in the same summary manner ever since, welcomed Sergeant Plumptree with a paralysing handshake and invited him round to a cup of cocoa.”

And then just a little later on the same character says:

“I can’t think why people should glorify beer at the expense of cocoa. It was that hearty vulgarian, Chesterton, who started it…”

There is also a short discussion between Hazlerigg and Bohun on the differences between mystery fiction and real-life police work – score one on the GAD bingo card – and elsewhere an observation that everything should be wrapped up in chapter sixteen, in a book that has sixteen chapters!

Bohun has an interesting personal idiosyncrasy which enables part of the solution to be presented to him in a most unexpected manner and there is a fair division between his amateur sleuthing and Hazlerigg’s official investigation with both helping reveal the truth.

Overall it doesn’t quite live up to its exalted reputation, but only by a sliver, so I can definitely give this a good recommendation.

Fulfils “Why – Has been reviewed by a fellow challenger” – see Rekha’s review at The Book Decoder here.

The Frumious Bandersnatch by Ed McBain

The Glass Key by Dashiell Hammett

Appleby on Ararat by Michael Innes

The Phantom Passage by Paul Halter

The Case of the Empty Tin by Erle Stanley Gardner