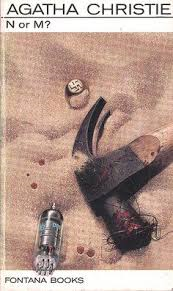 contribution to the war effort when they are visited by a Mr Grant, who knows of the work they have previously done for the intelligence services.

Unfortunately only Tommy is required and he can’t even tell Tuppence the nature of the mission he is being sent on. A recently deceased agent was on the track of a high-ranking German spy and his dying words indicate that they may be connected with the Sans Souci guesthouse in the coastal town of Leahampton.

Tommy travels there by a roundabout route and is surprised to find that an old friend has already arrived to help him in his task. Together they suspect all their fellow residents but are able to work their way to discovering the identity of N or M but not without some scares along the way.

I probably wouldn’t have remembered the guilty party from a previous read were it not for Sporcle quizzes. I was still completely surprised by how the ending panned out.

Like the first Tommy and Tuppence novel this is more a thriller, though with some genuinely clued elements. As far as I remember this is Christie’s only novel set during the Second World War and she never tried her hand at creating a regular mystery within the war time setting in the vein of Christianna Brand’s “Green for Danger” or Cyril Hare’s “With a Bare Bodkin”.

This book was published before the Americans had joined the war, and was possibly written before Germany invaded Russia, and so the outcome was very uncertain. There is encouragement shown in that the authorities having been underprepared are now doing better and with mentions of concentration camps a reminder to her American readers of the ruthlessness of the Nazis that might make them support entering the war.

She can knit well and making khaki balaclavas is one of her contributions to the war effort.

Have twin children: Deborah who is doing something hush-hush involving coding and Derek who is the Royal Air Force. They would not be adults if the timeline previously established was strictly adhered to as they would have been born c.1927.

He is 46 which isn’t quite consistent with The Secret Adversary where is at most 24 in 1920.

He is a mediocre golfer.

Is given the rank of Captain here, which must have been given for work between the wars as he was only a lieutenant at the end of World War I.

Has been married for six years and is the proprietor of The Duck and Dog pub in South London.

His wife and children have been evacuated to Wales.

The story is set across Spring/Summer 1940.

Tuppence says that Tommy looks like a “Dismal Desmond”. This was a cartoon dog from the mid-1920s created by Ian Hassall.

The government is concerned by the Fifth Column i.e. those living in Britain who are sympathetic with the enemy. The term became popular during the Spanish Civil War (1936-1939) but had been used as early as 1906.

Grant notes that Britain did not want war and was not prepared for it. As I get older it becomes more understandable why those who had witnessed the horrors of the First World War were so keen to appease Hitler in order to avoid a war. This is reflected when Tommy says “This is the second war we’ve been in – and we feel quite different about this one” to which Tuppence replies “I know – we see the pity of it and the waste – and the horror. All the things we were too young to think about before.”

When considering the meaning of Farquhar’s final words he concedes he may have been thinking of “Sister Susie’s Sewing Shirts for Soldiers”, a song written in 1914 by R. P. Weston and Herman Darewski.

Mrs Perenna struggles to run her establishment given the rationing of food.

Mrs Sprot talks about people returning to London because it is now safe. Evacuation of children from British cities began with the outbreak of war in 1939 but sustained bombing did not begin until autumn 1940 leading to some families returning, some then being re-evacuated.

My eyes lit up when I saw that one of the characters in a book about spies was called Bletchley given that Bletchley Park was the home of Station X, the centre of code-breaking during the Second World War. MI5 were concerned by this reference but Christie was able to assure them that she had chosen the name because she had once got stuck there on a train.

Von Deinim’s two brothers, although not Jews, are in a concentration camp.

Tommy jokes that Von Deinim might be “walking out with a Company Commander in the ATS”. The Auxiliary Territorial Service was the women’s branch of the army from 1938 to 1949.

Mr Cayley believes that the war will last at least six years and that Germany could hold out indefinitely with Russia behind her. At this point the Molotov-Ribbentrop pact was still in effect but certainly by the time of publication in the USA this had changed.

Grant informs Tommy that all German men aged between 16 and 60 will shortly be interned. Internment did take place in 1940 but there was an outcry in Parliament and many were released.

The guesthouse residents discuss whether the Germans had been right to execute Nurse Cavell for helping soldiers escape from them during the First World War.

Sheila’s father was “a follower of Casement in the last war. He was shot as a traitor!” Sir Roger Casement was involved in the Easter Rising of 1916 that tried to win Irish independence and was subsequently tried and executed as a traitor.

The guesthouse residents discuss whether France can rally and whether Weygand could pull things together. Maxime Weygand replaced Maurice Gamelin as French Supreme Commander following the German invasion of France in May 1940 but was unable to change anything and France surrendered on 25 June 1940.

Reference is later made to the evacuation of British troops from Dunkirk and the fall of Paris.

Haydock says that Tommy is an LDV. The Local Defence Volunteers were those ineligible to join the regular armed forces but who wished to defend their country in the case of an invasion. They were soon renamed as the Home Guard.

Major Bletchley says “Remember your Dickens? Beware of widders, Sammy.” This is advice given by Tony Weller to his son Sam in “The Pickwick Papers”.

Tuppence receives a Bonzo postcard. Bonzo was a cartoon dog created in 1922 by George Studdy.

An enemy agent refers to “a brave new world, as Shakespeare puts it.” The phrase comes from “The Tempest” and had been used as the title of Aldous Huxley’s 1932 dystopian novel.

Tuppence refers to the events of The Secret Adversary. It is revealed that their former employer from that book was actually a Lord Easthampton. He retired to Scotland to fish but is now in ill health.

There is a character called Anthony Marsdon which is almost exactly the same as Anthony Marston in And Then There Were None.

Fulfils “When – Set during First or Second World War”.