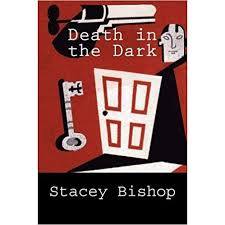 recommended for me following many initial searches for “British Library Crime Classics” and “Martin Edwards” (who wrote the introduction). Having received a work award in the form of a US dollars VISA card the current price fitted in the range that would translate as near as possible with enough of a margin for exchange rate fluctuations (an accountant’s private life is an exciting one!).

A shot rings out in a pitch-black apartment and immediately the body of Dave Denny is discovered with a look of surprise on his face and bullet through the middle of his head. But how could he have seen his killer and how could they have seen him?

Further impossible shootings lead to more death – we are told this in the preface which is too detailed in my view – but it is only the solution to this first scenario that is of any great shakes. One murder method would have been much more quickly identified with more rigorous basic methods of detection and another is just nonsensical.

It is implied that this is in part a parody of S. S. Van Dine’s Philo Vance novels but having not yet read any of those I have no idea if that works or not.

In some respects the book’s genesis, described in a detailed Afterword as an act of artistic revenge, is the most interesting thing about it.

Overall I can’t recommend this book but it’s better than a corporate mug so I can’t really complain.

What Else I’ve Been Reading Recently

A Private View by Michael Innes – an intriguing start, with a saggy middle,

before all is redeemed by an excellent final chapter that ties everything together.