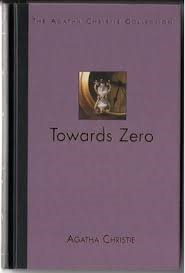 and Superintendent Battle are changing their holiday plans. September sees various parties converging on the sea…and all heading inexorably towards zero hour.

Nevile Strange would like his first and second wives to get on well and so makes sure that all three of them visit Lady Tressilian at the same time. This makes for a decidedly awkward houseparty which is not improved when their hostess is killed. It seems to be an open and shut case but once the visiting Superintendent Battle starts investigating it becomes clear that it is anything but.

This is possibly the only Christie novel that I haven’t read before (I’m hazy on They Came to Baghdad and Destination Unknown) but unfortunately I once caught the end of the Miss Marple TV adaptation (yes, clearly she isn’t the book but with only twelve novels what is a TV producer to do?) and so I didn’t get the full impact of this one. This means I find it quite hard to decide whether it is top drawer or not.

However it was definitely enjoyable and Christie set out to do something specific and I think she achieved her aim.

Has five children of which Sylvia, aged 16, is the youngest.

His wife is called Mary.

Has a nephew in the police, Inspector Leach.

The story is probably set in 1938 given 12th September is a Monday.

Having survived his suicide attempt, Angus MacWhirter faces the “prospect of being hauled up in front of a police court for the crime of trying to take his own life”. In England and Wales this was the case until 1961.

Thomas Royde had the childhood nickname of “True Thomas”. Sir Thomas de Ercildoun (c.1220-1298) also known as Thomas the Rhymer or True Thomas was meant to have been incapable of lying and was supposed to have prophesied various events in Scottish history.

Nevile has a Burberry coat. Burberry was founded in 1856 and became known for its waterproof coats. Roald Amundsen, Ernest Shackleton, and George Mallory all wore Burberry on their adventures.

A Lady Tressillian (two Ls) was Carla Lemarchant’s grandmother in Five Little Pigs, but for various reasons can’t be the same person as the victim in this book. It was clearly a favourite name of Christie’s as she also used it (with one L) for the butler in Hercule Poirot’s Christmas.

Battle refers to Hercule Poirot’s methods and mannerisms and something about the crime scene reminds him of him.

Fulfils “What – Number in the title”.

A very meta beginning as Mr Treves is unwittingly the opening character that he describes as “the elderly gentleman sitting in front of the fire opening his letters.” His idea that the murder should come at the end should be a massive clue that Lady Tressilian’s death is not the primary murder and that it is yet to come.

We know that the crime has been plotted well in advance and I spotted that both Kay and Mary are self-confessed planners.

The idea of whether the handedness of a killer can be determined from how a blow has been struck is discussed. I can testify that this would be tricky – at least until the weapon had been found. If I was to hit someone with a short implement e.g. a rounders bat, I would appear to be right-handed, but if I used something longer e.g. a baseball bat, I would appear to be left-handed (not that I’m planning on dealing anyone such a mortal blow).

I love that MacWhirter deduces what has happened and makes up his testimony (a trick used by Poirot in one particular book) and that Battle realises that it is false but that the idea in it is true.

Artists in Crime by Ngaio Marsh

The Spoilt Kill by Mary Kelly

The Back Bay Murders by Roger Scarlett

Death and the Pleasant Voices by Mary Fitt

Service of All the Dead by Colin Dexter

Puzzle for Fiends by Patrick Quentin