Ellery and Richard Queen are visited by two gunmen and their boss, Abel 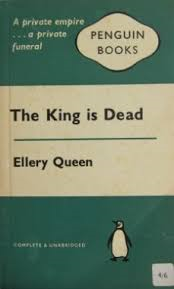 Bendigo, who asks them to come with him. They protest that they have other commitments  – although Abel knows that Ellery is “four issues ahead with the editorial work on Ellery Queen’s Mystery Magazine“- but their objections are ultimately overcome by a letter from no less than the President of the United States!

Abel wishes them to investigate the threatening letters that his brother “King” Kane Bendigo has recently received and so they accompany him to King’s private island base, somewhere in the Atlantic Ocean. This centre of operations feels very much like a Bond villain’s lair, although his first adventure did not appear until the next year.

Threatening letters continue to appear, specifying the exact time at which King is to be killed and lo, it comes to pass at the very hour predicted King is shot – but by an empty gun and through two solid walls!

Ellery goes all Hercule Poirot in investigating the psychology of the Bendigo family – which gave me a laugh out loud moment – to understand Who is responsible and from that point he is able to understand the How.

I appreciated the How but it does demonstrate that Queen père et fils have made remarkably little progress in one particular area of detection since the beginning of the series.

This book comes in at number 11 on Ed Hoch’s list of The Top 15 Impossible Crimes and coincidentally is number 11 from the list that I have read. I have Carter Dickson’s “The Judas Window” and “He Wouldn’t Kill Patience” – numbers 5 and 13 – on my TBR pile which just leaves “Too Many Magicians” by Randall Garrett and “Invisible Green” by John Sladek to find.