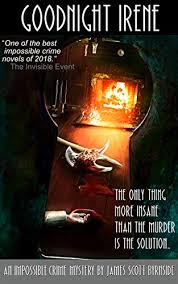 Rowan Manory is a private detective who hasn’t had a case for four months following the bad publicity surrounding the fallout from his previous investigation – featured in Chapter 1 which felt like a pre-titles sequence à la TV shows like Elementary or The Mentalist. He therefore jumps at the chance to travel from Chicago to Mississippi to investigate a threatening letter received by Robert Lasciva, a man connected to a twenty year old suicide which his policewoman mother worked on and which was never satisfactorily resolved.

With his sidekick, Walter Williams, in tow Manory arrives at a weekend houseparty that is soon cut-off by the real-life 1927 Great Flood, and within hours of arriving has to investigate his host’s armoured and beheaded corpse found in his locked study and the disappearance of his aunt from the same locked room. From this point on you won’t want to stop reading until you reach the dawn alongside the dwindling group of survivors.

Classic GAD tropes feature in both the set-up and resolution and are utilised well. I had one idea about the possible significance of the suit of armour which was completely wrong and would actually have created more problems that it would have solved but spotted the point of one minor clue – even whilst simultaneously disagreeing with it!

Manory is an interesting central character. He has the arrogance of Hercule Poirot saying “I am the best detective I know” but differs significantly in that he puts the law before justice. I am interested to see how this viewpoint plays out in later books.

How do I answer my first question? It’s too early to say whether Byrnside will become JSB but this is an excellent first novel and I will definitely be getting hold of “The Opening Night Murders” and the “The Strange Case of the Barrington Hills Vampire” with eager anticipation in the next couple of months and I would encourage you to have a read of “Goodnight Irene” and then do the same.

N.B. early in the the investigation a full spoiler for “The Big Bow Mystery” by Israel Zangwill is given.

The Pale Horse by Agatha Christie

The Fabulous Clipjoint by Fredric Brown

The Dain Curse by Dashiell Hammett

The Eight of Swords by John Dickson Carr

Gently Through the Mill by Alan Hunter

The Snack Thief by Andrea Camilleri

The Way Through the Woods by Colin Dexter