Anthony Cade is entrusted by his friend Jimmy 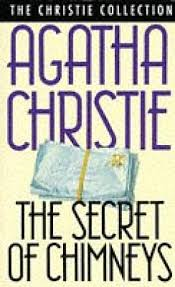 McGrath to deliver the memoirs of Count Stylptitch, former Prime Minister of Herzoslovakia, to a London publisher and to return some personal letters to a Virginia Revel.

At the same time, George Lomax is arranging for a meeting to take place at Chimneys (No. 3 in Historic Homes of England) between the likely new king of Herzoslovakia and a British syndicate interested in negotiating oil concessions.

Anthony deals with various factions interested in the memoirs before locating Mrs Revel, and having assisted her with a temporary inconvenience, arrives at Chimneys just as someone is shot dead.

Due to the sensitivity of the case, Superintendent Battle (a cut above Inspector Japp) is given control of the investigation, and whilst he doesn’t completely trust Anthony, he allows him his head to a certain extent and between them they manage to make everything turn out “all gas and gaiters”.

I had remembered this as being a traditional country house murder mystery, but it is nothing of the sort. It is much more a thriller, with Ruritanian influences, and due to the number of elements in play is superior to “The Secret Adversary” and “The Man in the Brown Suit”. As with them it is a nice read, but there is nothing in it to indicate that next time I will be reviewing one of the essential Golden Age Detection works, “The Murder of Roger Ackroyd”.

If you do like this book, then I can recommend James Anderson’s “The Affair of the Bloodstained Egg Cosy” which is a genuine homage to the Golden Age.

Works for Scotland Yard and has worked on the deplorable business of the party funds.

Is described as “a squarely built middle-aged man with a face so singularly devoid of expression as to be quite remarkable.”

Was given the rule “Never show emotion” and has found it very useful.

Is surprisingly agile for so stolid a man, shown when he vaults out of the library window.

The story is set in 1926, a year after publication.

Jimmy implies that it won’t be a problem for Anthony to travel under his name as they’d probably have the same description on a passport. I assumed from this that British passports had no photograph at this time, but they were actually introduced in 1914.

The Wallace Collection was established in 1897 and can be found in Hertford House, London.

Anthony wonders what the Eugenic Society would make of one of the Comrades of the Red Hand. Francis Galton believed that desirable human qualities were hereditary traits and coined the term Eugenics in 1883 and it soon became an academic discipline, spawning the British Eugenics Education Society in 1907. Support for the idea peaked in the years before the Second World War, and then declined once the consequences of its implementation had been demonstrated by the Nazi regime in Germany. The related ethical issues are being considered again as varying degrees of genetic engineering become possible.

Virginia refers to visiting the police at Vine Street. A watch-house was established there in 1767 and it became a police station in 1829, becoming one of the main stations in Central London. It closed in 1940, was re-opened in 1966, then finally closed in 1997, before being demolished in 2005. Marlborough Street and Bow Street (see #4 – Poirot Investigates) are grouped with Vine Street in Monopoly because they are all associated with the law.

Anthony says that “all will be gas and gaiters”. At this time it meant that the outcome would be favourable, whereas the meaning has changed over time to refer to pomposity and verbosity.

King Nicholas IV married an actress of the Folies Bergère. This was designed as a Paris opera house and opened in 1869 as the Folies Trévise, but was renamed in 1872. It was at its most popular from the 1890s to the 1920s, but is still operating today.

Bill refers to King Victor as “this Arsène Lupin fellow”. Arsène Lupin is a fictional gentleman thief and master of disguise created by Maurice Leblanc in 1905.

Bundle says that young people’s unpleasant ideas about love-making come from reading “The Sheik”. This is a 1919 novel by Edith Maude Hull, which revived the desert romance sub-genre of romantic fiction. It was made into a 1921 film of the same name starring Rudolph Valentino.

Panhard (originally Panhard et Levassor) is car manufacturer founded in 1887. It ceased production of civilian vehicles in 1967 to focus on military vehicles and was taken over by Renault Trucks Defense in 2005.

References to other works

The story begins in Southern Africa, where the previous book, “The Man in the Brown Suit” ends.

A line toward the end of the book refers to settling down in the country somewhere and growing vegetable marrows, which is what we find Poirot doing at the beginning of the next book, “The Murder of Roger Ackroyd”.

Fulfils “Where – At a country house”

The Terracotta Dog by Andrea Camilleri

Two-Thirds of a Ghost by Helen McCloy

Cork in Bottle by Macdonald Hastings

‘Til Death by Ed McBain

Till Death Do Us Part by John Dickson Carr

The Case of the Shoplifter’s Shoe by Erle Stanley Gardner