For my latest Agatha Christie review I was joined on 9th May 2020 by Brad from ahsweetmysteryblog to discuss everything that happened “After the Funeral”. If you are familiar with the book then click here to get the full spoilerific version.

Countdown John: You’ve said on your post recently this is the best Poirot which is a big claim. 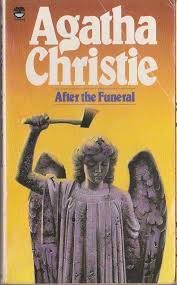 So when did you first read it – early, late, middle?

Brad: I was probably 13 or 14. I think it was one of the first. The first Poirot I read was “Murder on the Orient Express” and this came pretty soon after that and at that time I loved it but I didn’t think it was the best Poirot. I didn’t know there were 31 other Poirots. That feeling has come about because I’m a grown up and I’ve read them all so many times. And is it the best? It’s all personal but it’s my favourite Christie and my favourite Poirot by far.

So I came to it later in my reading of Christie. My parents had a reasonable number on their shelves which I had got through and then we got a number from a friend of theirs who was getting rid of them, possibly because they were now duplicates. How would you describe it in a non-spoilerish way?

When I first read the Bantam paperback they tried to describe Christie in a more modern way. This is the case of the corpse with its head bashed in and the greedy nieces hungry for money – they made it kind of sensationalist. But really it’s the last great, classically clued Christie. There are some good Christies that come after it but none of them with that sense of the cluing. It’s the last great family mystery. Every time I say this I think of Ordeal by Innocence which is such a different experience but it does have a really interesting family but feels like a really different kind of mystery. I was just listening to the All About Agatha podcast and they had just done After the Funeral and the next book A Pocket Full of Rye which is another family mystery and it’s so inferior as a family mystery in my opinion. So it’s the last great family mystery and the last great clued mystery. From then on she loosened up.

I was thinking how it starts with the butler, Lanscombe, the last of the family retainers, similar to Tressilian in Hercule Poirot’s Christmas, and I was thinking is this the last country house mystery or the last family one? And I thought of A Pocket Full of Rye which is family based but different although I like it a lot (which I will go into next month) but that has a more modern setting. And Ordeal by Innocence does have a very different tone in what it is saying and how the plot works.

It’s got a very different butler, A Pocketful of Rye, Mr Crump, who is very Dickensian – a bad butler. I didn’t understand it as a kid, but in that opening chapter Lanscombe is setting us up for the end of this era, the end of GAD. The end of the feeling of old time mysteries with servants. They’re not going to be able to afford him or the house or the staff any more. We’ve all seen that on Downton Abbey. But this time it’s about money. No one can afford an estate any more, not after the war. So you’re not going to have country house mysteries any more in that way.

In the recent books there have been a number of references to post-war fixed incomes having become lower for the middle classes, Miss Marple even, as mentioned in the previous book They Do It With Mirrors, can only maintain her standard of living thanks to the kindness of her nephew, a successful author.

In They Do It With Mirrors, and it is interesting that it comes before this book, you see what is happening to these houses now. People have to take them over and turn them into schools or prisons or offices or apartments. And it’s funny because that is to me a far inferior book to this one. It’s got some good things in it and whilst it makes use of the house, the juvenile delinquents do nothing for me. 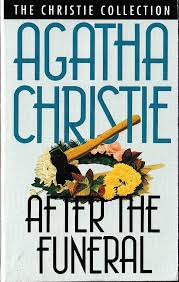 In After The Funeral, the house is no longer going to kept on by the family following Richard’s death. When Poirot goes undercover he is posing as a representative of a fictitious refugee organisation who plan to turn the house into an institute of some kind.

He’s saying let me take this beautiful country home and fill it with foreigners and the younger generation could care less, they just want to get it off their hands – it’s a real sign of a whole new England. I don’t know that she was making a negative stance of it but Poirot’s alias gives us a chance to look at what was going on in that world, how it was all breaking down, not just the class structure but how the neighbourhoods were going to become integrated.

It’s a nice link back to The Mysterious Affair at Styles where Poirot himself arrived as a Belgian refugee from the First World War.

So, the story begins, as the title say, after the funeral of Richard Abernethie who has died, seemingly after a short illness. Although the doctors said he could have lived on for some time, they’re not surprised. He seemed to have lost the will to live after the recent death of his son and heir. The family have congregated back at the house when his sister drops a bomb into proceedings when says (the tagline on the back of the copy I first read) “But he was murdered, wasn’t he?” Everyone is confused as to where that idea comes from but she rows back and everyone goes home thinking that she is a little bit batty and that’s just the kind of thing that she says.

But the next day Cora is found brutally murdered, possibly the victim of a burglary gone wrong, or perhaps she has been silenced. Entwhistle, the family solicitor begins his own investigation into whether there is a link between the deaths of Richard and Cora, but ultimately has to call in Hercule Poirot to find out what has happened.

After this we went into great spoiler detail but ultimately this is an excellent Christie and I would definitely recommend reading it and then coming back to see the rest of our discussion.

Solved a small domestic problem for a Continental butcher who in return is now “sympathetic to him in the matters of the stomach”. It appears that he may be getting more than his ration book would allow.

Some friends of Helen Abernethie knew him, though she had assumed he had died long ago.

Goes undercover at Enderby as M. Pontarlier of UNARCO (his made up United Nations Aid for Refugee Centre Organisation).

“‘Suddenly, at his residence’ that’s what it said in the paper.” said Cora, nodding her head. Although standard wording when announcing a death, possibly a hat-tip to Christianna Brand’s 1946 novel “Suddenly at His Residence” aka “The Crooked Wreath”.

Mr Entwhistle thinks about a number of famous murderers including Seddon and Nurse Waddington. Frederick Seddon (1872-1912) poisoned his lodger Eliza Mary Barrow and was found guilty, mainly because he chose to give evidence in his own defence and did so very arrogantly and condescendingly.  Dorothea Waddingham (1899-1936) turned her house into a nursing home and killed two of her patients with morphine.

In connection with Cosmetics and Beauty, Miss Gilchrist mentions Elizabeth Arden and Helena Rubenstein. Florence Nightingale Graham (1881-1966) started to trade under the name Elizabeth Arden in 1910 when she founded the Red Door salon in New York. By 1929 she owned 150 salons across Europe and the USA. Helena Rubinstein (1872-1965) started her business in Australia making Crème Valaze before moving to London and then New York. Arden and Rubinstein became life-long rivals, although the latter said in a somewhat backhanded compliment “with her packaging and my product, we could have ruled the world”.

George Crossfield may be involved in black market activity and Miss Gilchrist is lavish in dispensing Timothy and Maude’s tea and sugar ration.

Rosamund talks about a revival of “The Miracle”. This is a wordless play from 1911 by Karl Vollmöller which tells the story of a wayward nun.

Mr Goby, who had previously appeared in The Mystery of Blue Train, is used here organise the investigation into the circumstances and movements of the suspects.

There is a slightly spoilerish reference to Lord Edgware Dies.

Inspector Morton remembers Poirot from the Pangbourne Case. I can’t remember if that was the location of one the earlier novels or short stories.

The Mystery of the Yellow Room by Gaston Leroux

Death of Jezebel by Christianna Brand

The Case of the Careless Kitten by Earl Stanley Gardner

The White Lady by Paul Halter

Lion in the Cellar by Pamela Branch